Before Call of Duty: Modern Warfare, Brothers in Arms and various other popular war games, there was the Risk game. Risk was a strategy board game manufactured by the Parker Brothers (now part of Hasbro) and was based on the French board game called La Conquete Du Monde, which translates as The Conquest of the World.

The original was invented by the French movie director Albert Lamorisse. Gameplay was turn based and involved anything from as little as 2 players to 6 players.

In the original version the Risk game board featured a map of the Earth, divided up into 6 continents, which had 42 territories divided between them. The object of the game is simply World Domination, or to put it more precisely, to occupy all the territories on the map and in the process, eliminate all the other players from the board.

Each player controls armies that they use to capture territories occupied by other players. Moves are made based on the roll of dice. There are different colored tokens that represent armies. There are 5 different dice in 2 different colors. 2 white for the defender and three red dice for the attacking player. There are also a 72 Risk cards, 42 for territories, along with a symbol representing either an artillery, cavalry or infantry piece.

One Risk card is given at the end of each players turn, if they have conquered at least one territory. Only one card can be awarded each turn. There are also 2 wild cards that represent the different army types as the Risk cards, without representing a territory. As they all have 3 symbols they can be used with 2 other cards to make a set. There are also 28 Mission cards that can be used in the alternative game play known as Risk Secret Mission.

It can be a complicated game to play at first, but like anything once you have played it time and time again, you get a sense for it and can really master the skills needed to play the game well. It is a must for all fans of war movies, especially ones that include a lot of tactical planning and those famous scenes with maps and sticks moving miniatures across different continents and areas of the world.

Risk is Also an Collector’s Game

Many different editions have been made available over the years to represent different battles and famous war zones, movies, TV shows and even computer games: the Walking Dead, Lord of the Rings, Game of Thrones, Star Wars, Halo, Metal Gear, Call of Duty etc. Not to mention all the different basic editions: Europe, wooden book box, 60th anniversary..
No wonder some people collect them!

Older editions of the game in good condition can make quite a bit of money with collectors. Obviously the better the quality of the pieces, cards, board and actual box would mean a much better price.

The Risk game has truly cemented it’s place in pop culture history. There were rumors many years ago about a Risk game movie (thriller/adventure). But so far it’s still only in the talk. And frankly, a movie will never beat this cult Risk appearance on Seinfeld…. 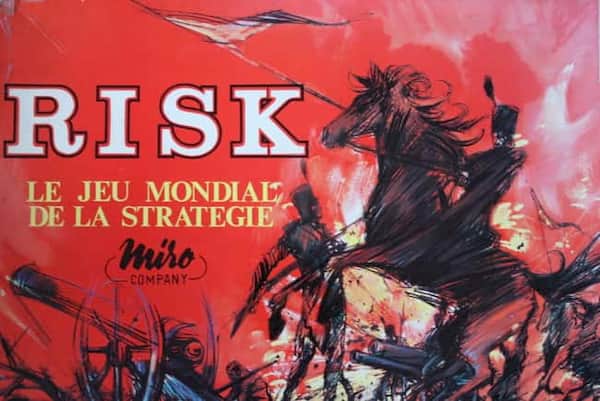