Barbie dolls have been around for many years with the very first Barbie (in a swimsuit) being shown at the New York toy fair in 1959. Since that time Barbie and her perfect looking entourage have become globally recognized and many children have played with Barbie and Ken when younger.

Many parents however have complained in recent years that Barbie’s impossibly skinny figure and again, her off the shelf perfection has been setting impressionable girls up for a fall as her unrealistic statistics (if you were to transfer Barbie’s measurements onto a real life girl she would like be quite ill and seeing someone about her weight and health issues) cannot or should not be mimicked.

From the very start Barbie’s character was one of a teenage model and her clothing based on current trends in the fashion world. Anyone trying to emulate Barbie was always going to be setting themselves up to fail. With Barbie being such a popular role model for young girls many have questioned Mattel on the suitability of such a role model for girls who nowadays face enormous pressures to fit in and be like everyone else.

Yes They Are Skinny But They Aren’t “Real”

The introduction in 2010 of Mattel’s Monster High dolls has most definitely smoothed the waters somewhat. Monster High dolls hit the market hard and have continued to take more than their fair share of the market share for this sector as parents and kids alike have decided this new modern doll is much more their thing.

Monster High dolls are not based on real life girls who are starved and smoothed. They are fun, funky and based on cartoon characters and stories so that girls may enjoy imaginative play and collecting these dolls without needing to check their hair first or feeling bad they don’t look the same as these new popular figures.

Where Barbie dolls are meant to be real girls Monster High dolls are anything but and many believe that this takes away any social pressures, which are present even in younger children nowadays to conform to a certain style or look. Monster High dolls instead encourage unhindered play and fun. It is unlikely that children will want to look like Draculaura or Cleo De Nile with their almost goth looks and clearly not size 4 bodies which are cartoon in shape and not true to what a “proper” girl should look like, as Barbie is.

Popular opinion seems to be talking with its debit card as Monster High dolls are selling fast, much to the joy of parents who in the main prefer their kids to play with dolls that celebrate difference rather than focus on everyone being the same, “right”, normal or part of a select niche. It looks like the toy doll market have realized what parents and young impressionable children in 2013 need and want after all.

Update. Since I wrote this post, a new doll line has been released. They are similar to the Monster High but based on fairy tales characters instead of classic monsters. Check out The Ever After Dolls 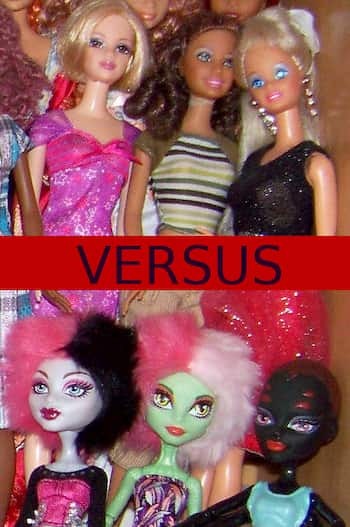