If you were a kid of the 1980’s, there was one playset that you owned, wanted or knew someone who did own it. The playset I’m referring to is the He-Man and The Masters Of The Universe Castle Grayskull.

He-Man figures were all the rage back then and this playset was the ideal companion toy for the figures. Castle Grayskull was of course the home of the Sorceress in Eternia and the source of Prince Adam’s powers that transforms him into He-Man.

Well 30 years later Castle Greyskull is back, with this fabulous exclusive edition by Matty. A true collector piece!

Update: since its release in 2013, This Matty exclusive Castle Grayskull have become a rare and very sought after collectible!

I Present You The New Castle Grayskull Matty Exclusive

The original playset released by Mattel in 1982 was a really cool toy. It had a handle on the top which made carry and moving it much easier, and the castle opens up to reveal two inner halves. On the outside the castle had a drawbridge that looked like a mouth, with tongue and teeth. On the inside there was a working elevator that worked by pulling a string, a combat trainer to help He-Man stay at a peek fitness level, a throne type seat and an unworldly looking computer, a rampart mounted laser cannon, two sided flag and a full kitted out weapons rack. If all that wasn’t enough there was a rather brilliant trap door, which was many fans favorite part.

Although the show stopped being broadcast and the live action feature film starring Dolph Lundgren as He-Man was a commercial and critical flop, the interest in He-Man and MOTU (Masters Of The Universe) toys has never really subsided with them becoming sought after items by toy collectors. This is probably why Mattel have made the decision to release a new and improved Castle Grayskull playset this year.

A Glance at the New Caste Grayskull

Taking a first glance at the new Caste Grayskull 2013 it is not hard to see that the changes that were made were a very good idea. Not only is it much taller than its predecessor, the greens on this playset are much more vibrant than the original. One of the biggest selling points besides the extras and additional items in the playset is the fact that there are places for you to place MOTU figures on the Castle, which means if you are a collector you now have a more interesting way to display them rather than just in a straight line.

It looks fantastic and there is so much more detail than the original. There are more bay windows, tower sections and parapets as well as a stone base with lots of protruding crags and rocks. Whether you are a collector or a kid, your action figures will look like they are firmly in the middle of the action.

Taking a deeper look on the inside there are lots of interactive features such as places to keep accessories, vehicles, action figures, areas that can be locked and unlocked, moving elevators and opening doors. There is so much to love in this set. If the reaction to its release in 1982 is anything to go by, the new and improved version will be a big success with old and new fans of the toy collection, whether for playing or displaying!

No figures are included in this set. Only the castle! 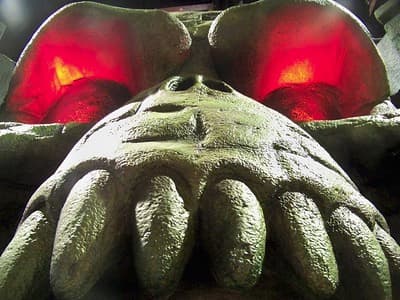