One of my son’s little friend offered him 2 Beyblade metal fusion tops for his birthday. I had no idea what they were (despite the fact that I am a pretty cool mom) and to tell the truth I would have happily lived in the dark about these toys. But I know some kids just love them. And they do have a collector’s appeal as well. The other day we went to visit one of his friend. They played with the Beyblade Dome. They had fun, but in the long run my son got bored.

I’ll be honest, I am not a fan of the Beyblade toys (or TV series). I love toys that entice imagination and toys that won’t bore my son after a day or two. And playing with the tops only is quite boring. I guess that is why they made the Beyblade Dome!

But if your kid is just mad about Beyblade, here’s my Dome review: 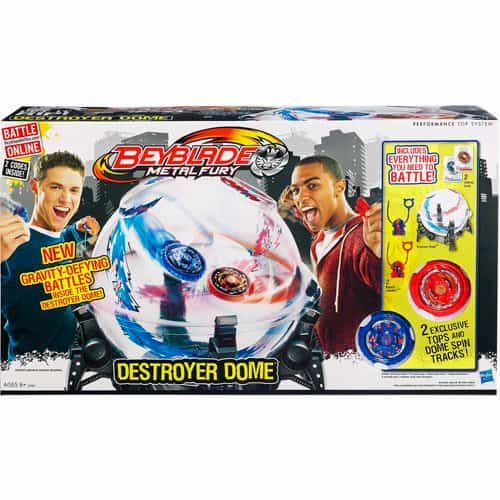 The Beyblade Dome is sure to be on the 2012 Christmas wish list of boys who are fans of the Beyblade toys. This playset allows for a 360 degree battle of inside a clear plastic dome. To use, two tops must be assembled and then placed at the openings on the top. A rip cord is used to launch both tops into a battle inside the dome, where they may collide against each other as they spin and move quickly around.

A variety of accessories are available to make the battles even more exciting, but the Beyblade Dome does include enough accessories to be a good standalone starter gift.

It includes two 5 piece tops, but you can use it with any five piece Beyblade tops already owned. The playset also comes with two rip cord launchers to get the tops moving and ready for battle. Other accessories include 2 trading cards which can be used for virtual online battles.

Who is the Beyblade Destroyer Dome Playset for?

This toy is meant specifically for children 8 years or older. There is some assembly required and sticker decals to apply, but the assembly is simple enough that an older child may enjoy putting it together himself. It also look and feel a bit cheap, so kids should take good care of it and not be too rough. Although younger kids would enjoy this, they should be careful as it is made of flimsy plastic. Also, launching the tops into the dome is not that easy!

If you know a boy who is a fan of Beyblade toys and already has the stadium, this is a good gift idea. If he doesn’t have a Beyblade stadium yet, I would choose a stadium or arena over the Beyblade dome. And if your kid loves imaginative games or get bored easily, the Beyblade dome is NOT for him!

Stadium or Arena, a better choice in our opinion

(#CommissionsEarned As an Amazon Associate I earn from qualifying purchases)

Watch The Dome in Action