Playmobil toys have delighted children around the globe for the past 40 years and continue to be one of the most popular toys on the market. The 3 inch high plastic characters have a magical quality that inspires an unbelievable amount of creativity and imagination in children. These adorable characters are brought to life everyday in bedrooms, playrooms and living rooms around the world through grandiose make-believe adventures.

In the blink of an eye a child can be taken on an incredible journey, along with their imaginary Playmobil playmates, to places like a prehistoric land where dinosaurs roam, a medieval castle with knights and a fire-breathing dragon, a magnificent mansion for the rich and famous, a bustling western town with fearless gun slingers, or even a big city zoo. And the list goes on and on. So how can a little plastic figure have such an impact on a child’s imagination.

The Mastermind Behind Playmobil

The brilliant mastermind behind these toys was Hans Beck. Hans was born in Germany in 1929. Living his early years in war-torn Germany, where the popular German toy industry had undergone many significant changes shifting their focus to primarily producing war toys, Hans probably never imagined he would be the individual responsible for making millions of children happy year after year all around the world.

Hans was a model maker and wished to work in the toy industry but work was hard to come by after the war when the toy industry declined because they were no longer allowed to make war toys. He became a cabinet maker instead which was a highly sought after trade at that time. In 1958, at the age of 29, he was selected from a list of 20 candidates to work for a family owned and operated toy manufacturer called Geobra Brandstatter. He was hired as a product designer and after years of hard work, enthusiasm and obvious talent he was made head designer in 1971.

The Birth of Playmobil

As a direct result of the oil crisis in the early 1970’s and rising oil prices, Hans Beck headed up a project to develop a toy for children that would require less solid plastic than what the company had previously been producing under the direction of Horst Brandstatter (Geobra’s sole owner). He spent 3 years developing the Playmobil toys that were introduced to consumers in 1974. The tiny 7.5 cm high plastic figures would be just the right size to fit into a child’s small hands and would have a face that young children could identify with.

Beck based the facial design of the figures on actual drawings done by young children. The drawings depicted people with an oversized head, two eyes, a cheery smile but no nose. His extensive research into the design of the Playmobil characters led him to produce a simple, uncomplicated figure with some flexibility (movable head, arms and legs) but not so much flexibility that it would hinder a child’s imagination. Beck’s vision, his understanding of what children needed and wanted, and ultimately his design of the Playmobil toys was an immediate worldwide success that has been going strong for 40 years.

Hans Beck retired from Geobra Brandstatter in 1998 and, sadly, this German inventor and the “Father of Playmobil” passed away in 2009 at the age of 79. Hans Beck’s legacy lives on, however, as new Playmobil toys are created every day. The current Head of Development at Geobra, Bernard Hane, follows Beck’s same philosophies when it comes to the design of these beloved toys.

One of their most valuable sources in designing new toys are the letters received from children across the globe. Up to 3,350 letters are received from children every month at Geobra with their ideas in writing, as well as drawings and sketches, as to what they think certain toys should be like. Many of these drawings are displayed on the office walls of the company and are used as valuable input in the design and development of new toys from their most treasured customers, the kids.

Young children are, of course, fans of these wonderful toys but many older kids as well as adults are also fans. Many are collectors who love to share stories, memories and pictures of their collection of Playmobil toys with others who share the same passion. Some people even create movies of their Playmobil characters.

The Playmobil phenomenon seems to reach out to all genres. French film maker and photographer, Richard Unglik, has an exhibition in the Hall of Coats-of-Arms at the Chillon Castle (on the shores of Lake Geneva) called “An Imaginary Museum of Playmobil”. Using Playmobil characters, he has created scenarios from great historical works of art such as The Last Supper and The Mona Lisa. The Playmobil characters are dressed up in costumes like individuals in the famous paintings. Thanks to the creative mind of Hans Beck many years ago, Playmobil is truly now a work of art.

Playmobil is also celebrated in many exhibitions across the wold. In Germany, you can visit the Playmobil themed park 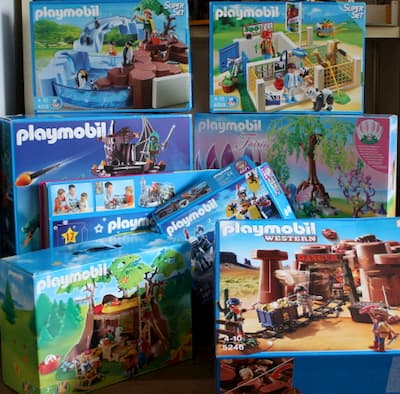