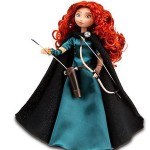 This is the real Merida, the one your little girl really wants!! Disney Store Exclusive 11″ Classic Doll Brave Princess Merida

Many parents are frustrated by the recent “makeover” of Disney’s Merida doll from the movie Brave. This frustration stems from the fact that the original version looks more like a real girl and not a glamorous princess.

These concerned parents feel as though Disney is sending the erroneous message that the first likeness of Merida was never good or “sexy” enough. The company made the changes in an attempt to appeal to the girls who prefer to play with princess-type dolls…. think Ariel, Snow White and Cinderella.

Since we live in a far-from-perfect world, the first Merida doll represents the most realistic choice of young heroines. She doesn’t have a perfect waistline, a million dollar gown or hair to die for. Her image is strong, brave and confident.

She comes complete with her beloved bow and arrows and is dressed in the appropriate fashion to start her next adventure. (There’s something to be said for a comfortable pair of shoes!)

The updated doll gives you the impression that she’s never been on an adventure in her entire life, with the possible exception of attending a ball with the Prince of her dreams. Instead of a bow, she comes with a brush for her hair. Honestly, what would the “real” Merida do with a brush in the forest?

Seemingly, the underlying message the second doll sends is that beauty is far more important than bravery and being yourself. In addition, this Merida looks older than the original one… more like an adult than a teenager.

The movie, Brave, received much praise because it touches on a somewhat ordinary girl’s capacity to change things going on around her. It didn’t come anywhere near giving the impression that that same girl should look like a princess, while doing so.

It’s probably obvious that the newest version of Merida will be the preferred choice of many little girls. Of course, there’s certainly nothing wrong with that as long as they don’t feel pressured to grow up to look like she does.

However, the general consensus is that Disney has made and is still making a grave mistake by continuing to sell the made-over version of Merida. As a parent, it’s up to you to decide which doll is best suited for your favorite little girl. Hopefully, this post helps you make your final decision.

CHECK PRICEDisney Store Exclusive 11″ Classic Doll Brave Princess Merida
This is the Real Merida, the only one you should get. This one will become hard to find as time pass, so grab yours while she is still available.    CHECK PRICE

This is NOT what your little girl, who is a real fan of the real Merida, wants. Stay away! Or she’ll be really sad!

How About You? Which Merida do you prefer?