Home » What Advent Calendars I am Getting My Kids This Year

Advent calendars are, for some, as much a part of the Christmas holiday season as Santa Claus himself. Their origins date back to the 1800s to Germany when Lutherans would use them to count the days of the Christian season of Advent, which is celebrated from December 1st through December 24th, signaling the arrival of Christmas Day on December 25th.

Although Advent calendars come in many forms and can be enjoyed in a number of ways, traditional ones are usually rectangular in shape and are made from heavy cardstock or cardboard. There are 24 little doors cut into the calendar, which have all been numbered. The numbered doors are filled with little trinkets or candies or even a colorful holiday scene and are opened one at a time, each on its corresponding day. Even though they were traditionally meant to celebrate the Advent season, the calendar themes may or may not be religious. Some may have more secular themes to include Santa Claus, Christmas trees and other secular symbols.

Some of the Advent calendars marketed by toy companies are highly sought after and have become collectors items. They will incorporate various accessories, which combine at the end of the Advent season to create a beautiful display or setting. They usually contains a few unique pieces that cannot be found elsewhere. This is especially true for calendars by Lego, Littlest Pet Shop and Playmobil.

Their themes will vary between manufacturers to include every theme from traditional religious portrayals, to secular scenes with Santa Claus and his reindeer to totally unrelated to the season as it is the case with my picks!

So what I am getting this year?

2 Playmobil advent calendars (both shown in my picture at the top of this post). We are big fans of Playmobil!

Boys will enjoy counting down the days of Advent with this super cool Dragons Land Advent Calendar by Playmobil. The doors on this calendar open to reveal knights, horses, treasure chest, a cool dragon and lots more accessories needed for slaying dragons and conquering kingdoms. Once all the pieces have been revealed, your little dragon hunter can play out scene after scene against the magical mythical castle backdrop that is included with the set. The Dragons Land Advent Calendar is a special retired edition so expect to pay a bit more for this mystical set.

Almost every little girl wants to be a princess. And now, with the help of this Princess Wedding Advent Calendar by Playmobil, they can watch a fairy tale wedding unfold before their very eyes. As each window of the calendar is opened, another piece of the scene is revealed until the complete set of prince, princess, white horse, wedding cake, furniture and more is assembled against the beautifully designed backdrop, which is also included in the set. Once all the pieces (approximately 35 of them in all) are revealed by Christmas morning, the fairy tale wedding can take place! This makes a lovely Advent gift for any little princess in your life and is a great value buy! 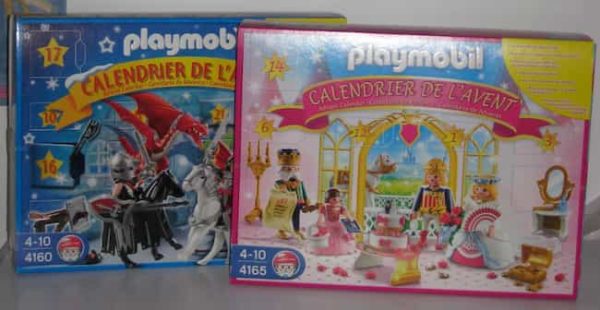