If you want the buy the complete Ghouls Rule Doll assortment of 5, you can check eBay as the bundle is no longer available on Amazon.

Or you can buy only your favorite:

Based on the legend of Cleopatra, this doll comes dressed in a Egyptian-inspired dress that has modern touches making it lots of fun. Girls can position her hands to “walk like an Egyptian.” She’s dressed in a blue metallic wrap dress that almost inspires a mummy-like appearance. She has strappy, blue shoes and accessories include a punch bowl and cup.

Draculaura is dressed in a pink, black and red costume with bat wings on her back. Her curly black hair has a streak of blood red. Draculaura has a bit of “bite” to her when she shows her fangs. Accessories includes a skeleton and mini cauldron.

Her Yeti roots give her a cold appearance and this version of the doll comes with an ice nymph costume. With her long blonde hair streaked with color and wristlets of snow, she is an ice queen to the core. Abby’s Halloween accessories include a purse and mask for the masquerade. Abbey Bominable was a Walmart exclusive.

With her werewolf background, Clawdeen has an adorably furry appearance. Despite the wolf-like appearance, she is dressed as fashionably as anyone with a purple body-suit and fingerless green gloves. Her ears are pierced and she has pale purple hair. Accessories includes a small coffin and bag. Oh and check out these furry boots! 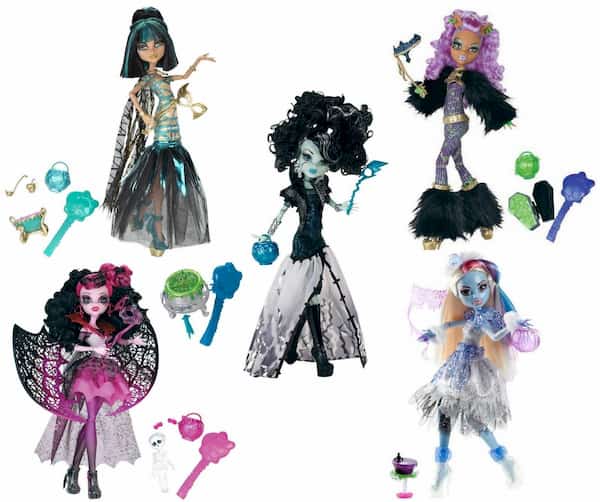